Tito Bird - yet another In Memoriam... 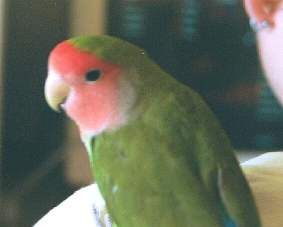 Tito arrived at home on occasion of Nico's 11th birthday. He was a few weeks old - not even a month, and you were only just a two and a half years old pup.

He immediately attached himself to Nico, and for the rest of his life he loved him more than anything and anyone, with a single-minded love that only a stubborn, little chunk of love like him could muster.

He stayed with us for some 20 years, long after his beloved had left home to make his own way in life. But of course Nico visited often, and he also took care of all of you when we were away. Every time he came by he opened the cage and took Tito out, often before he even said 'hello" to us. Unfailingly,  Tito melted in his hands. Nico would put him in his shoulders, or in top of his head, and walk in his usual hyper-active, hurried way around the house, while Tito hanged for dear life, enthralled with the adventure of being once again one with his master.

Tito had a big personality that looked out of place in such small body. He had a different way of relating to each of us, and it was very clear to us that he saw himself pretty high in the pecking order.
You, bigger, bulkier and usually gruffer, were nevertheless haunted by the fear that he may land on you whenever he fly freely about the house; he of course knew this and tested you every time. He even took possession of your toys and kept you away from your water bowl on more than one occasion. But it was clear to see that it all was a bit of a game to you as well, and that you liked that crazy little green person just as much as you loved all the other pets we had over the years. For a dog, my sweet Troilo, you were always a stupendous pet owner.
It seems to me my relationship with him ended up built around rituals - that is why it is still so hard to get accustomed to his absence: the essence of rituals lays in the sense of permanence their daily performance begets.
First thing off the bed was uncovering his cage, refreshing his water bowl and changing his seeds - shaking the container a little while he rushed to have his first taste of them, perching in his feeder and puffing up in satisfaction. Last thing at night was covering him up while I talked to him, bidding him good night and telling him how much we loved him, while he climbed up and up in the huge cage, as the covers enclosed the cage, responding to my calls and kisses, all excited by the mere performance of the night-time ritual and the perspective of another good safe night.
His cage was always in the same nook. Unlike you, who moved around the house, Tito could be counted on appearing within your field of vision when you passed through certain areas of the house. That translates now in a definite geographical marker for his absence. The lamp we lit for him at dusk, illuminated a discrete portion of our home with not just mere light, but also a clear indication of his presence. Hence the pangs of pain I feel at suddenly finding this beacon, which Gabriela still insists on lighting, now devoid of meaning but still on my path when I traverse the living room, or when I suddenly glimpse it, at the far left of my line of sight, as I enter the kitchen.
There was also the passive ritual of watching the interactions of others... Gabriela talking to him, bringing some food to him, putting her hand in his cage only to be attacked by him. Tito always had a strange relationship with Gabi. He loved her - there is plenty of evidence of that - but a big part of their exchanges was based in the fact that he could make her scream, and he seemed to enjoy it. As he also enjoyed exploring the new landscapes she constantly imagined for him on his cage, and the little morsels of food she always brought him from her dinner.

Bobo, on the other hand, was one that succeeded in surprising him. By the time Bobo came around Tito was used to being unchallenged. It was apparent from his demeanor that he considered his small bulk mighty, and his huge personality overwhelming, for he would strut about the house as the lord and master of his domain. But Bobo was not scared of him; on the contrary, he was curious about the tiny mobile bunch of green feathers that caused such raucous, and intended to smell it and lick it as soon and as much as possible. A couple of sharp bites in the tongue did not seem to deter him and most impressive of all, he showed no fear when Tito flew at him and sat on his rump.
Even after Tito lost his ability to fly and became mostly cage bound,  their relationship was a cordially adversarial one: Tito tried to call Bobo's attention by using his wings to raise a small tornado that filled the area surrounding the cage with debris (much to Gabi's delight,) while Bobo barked at him in response. Nevertheless, the truth is that they shared a lot of time being each other's company when we were away at work, and now it feels that Bobo is much too alone whenever we leave the house, however briefly.
Now that Tito Bird is gone, only resilient Old Fritz remains from the old gang. This business of living seems to bring us more and more often  to the neighbourhood of death.
He left us on September 10. I believe he died cradled in my hand, but I couldn't be sure - the moment of death is so elusive... I do know his eyes were open when I found him lying in his cage, and they closed as I held him. I stayed with him nested in my half-open hand for a long time, unsure and still hopeful, but at the same time aware that he was gone.
The day before he had been on the verge of death already. I phoned Nico and he rushed over. By the time he arrived Tito had improved a bit, and seeing his beloved Nico, being on his shoulders and arms, kissing him and getting kissed, seemed to bring him all the way back.  He stayed for a long while on Nico's shoulder, cradling against him, preening and fluffing up his feathers as he used to do to show his love and his comfort. I feel grateful for that moment.

The following afternoon, while I was holding his dead little body, what struck me was that I couldn't accept the simple fact that all that love was gone. To anyone that had ever seen Tito with Nico, it was immediately apparent that there was much, much more love inside that creature than what it seemed possible it could hold.
Afterwards I left his body wrapped in a warm cloth and I took a shower to come down,  but I kept crying and yelling, frightening poor old Bobo with my screams: "Were is that love now, where is all that love gone?"

That we die and dissolve into nothing, and disappear forever is something that however horrifying, it seems to bear a measure of sense - the brutal sense of entropy if anything, for we are matter after all. But that so much love can just disappear is something I cannot wrap my head around. After all, love has no body that can decompose,  no energy that can be exhausted. Love is the closest thing to an immortal soul I can believe in. So, where did it go?
Posted by Victor Alejandro Wainer at 7:12 PM